One of my favourite ethnic eats is Indian but it’s hard to get a full authentic meal on the table in the time I have with two kids. It’s something I only seem to be able to do for special occasions. But as I’ve discovered new flavours and spices I’ve learned to play a lot  more and create fun twists on classic dinners like this. They’re quick and I can get lot’s of vegetables into them, which, in my eyes makes them awesome. So voila, sloppy joes with an Indian flare.

I’ve  used more veggies then in a traditional sloppy joe. It’s healthier, decreases the amount of meat needed and super bonus it’s a one pan meal 🙂

A friend of mine skipped the bun and served the sloppy Joe sauce on a bed of spinach and said it was perfect that way too.

I recently updated this recipe to add measurements for some ingredients and to change when the tomatoes were originally added. The recipe is still the same but I found it a little clearer to say 1 cup of tomato instead of one big one:) 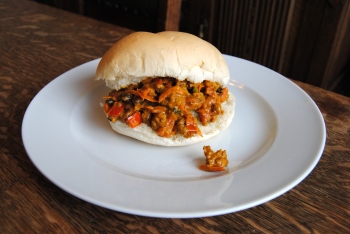 Delicious and a pretty colour

Heat a large skillet over medium high heat with the oil. Add the onions and tomatoes, cook for a few minutes until the onions have softened. Mix in the spices, ginger and garlic, cooking until it smells awesome (a few minutes).

Spread the turkey/chicken around the pan and begin to break it up. When the meat has browned, add carrots, raisins and red peppers to the skillet. Cook for a few minutes until carrots have softened. Stir in the ketchup  and season with salt. Reduce heat to simmer and cook mixture 5 minutes longer, stirring occasionally. Remove from heat and stir in yoghurt and cilantro.

This can be yummy topped with a little mozzarella cheese too