or How to Make Anything Taste Good

Years ago I realized I go through so many dried herbs and spices that those little dink jars  were just silly. So I started buying in bulk and storing them in reused glass jars with the label washed off. I’ve been using the same jars for so long that I know what size jar the chili powder is in and that the cumin’s lid has a trace of rust on it. However, if you aren’t me and don’t know the jars and aren’t super familiar with what’s in them cooking could be a bit of a crap shoot. 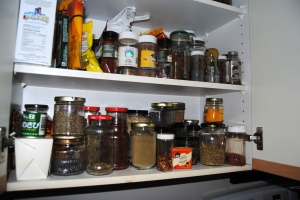 So, I always feel bad for my hubby when he tries to cook in our house. I usually get called at least two or three times into the kitchen to find what he needs. Telling him its the red one in the tall jar with the green lid usually won’t cut it. I love my collection of spices though. It’s part of what allows me to be so creative as a cook. Sometimes when I’m experimenting with a new recipe I just start opening jars and smelling. 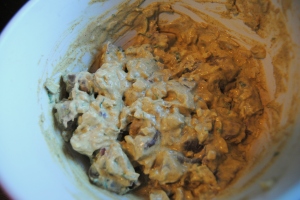 This came in really handy with this weeks theme of ‘make it freaking cheap’. I  used my creative genius to come up with some great satisfying meals that cleaned out a lot of my cupboard and freezer. It also meant using some of those cheaper cuts of meat that maybe took a little more finessing and creativity to become delicious. Ahhhh now you see the tie in… 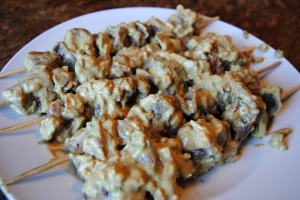 Kebabs ready for the BBQ

I have lots of stewing beef from the 1/8th of a cow we bought earlier this year but I’m not really a stew person. I needed a way to make these tougher chunks tender and add some love. This marinade worked perfect and the yogurt did exactly what I hoped it would. I can’t really find a flavour to describe it other than freaking awesome. It’s not curryish but more like a shwarma-ey/donairesque lovelyness, (my creativity apparently extends to the English language). I let it sit for 2 hours and I think you could rush it if needed.

I serve this in multigrain Roti, with tomatoes, cucumbers and a feta yogurt sauce. Which was a super simple combo of plain yogurt, garlic and cumin. It all worked perfectly together and I now have a much better use for the rest of that stewing beef hanging out in the deep freeze.

Mix all the ingredients together in a large bowl. Combine with your beef and let sit covered and in the fridge for 2-5 hours.

I cooked our kebabs on a super hot 500 BBQ for few minutes, flipped them once and gave them a few minutes more keeping them medium rare. 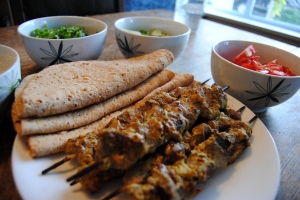 Enjoy! and if you want to see how this recipe fits into how my family eats watch for my next post. You can also get dinner ideas and join the conversation on Facebook

One thought on “Curried Yogurt Marinade”