The Canadian version of Thanksgiving doesn’t quite have the same spectacle that it does to our Southern neighbours. Yes, we have our turkeys and pies, plus a few good football games. But there are no pilgrims, large rocks or bowls and the best history I can find is that explorers had a heck of a time not dying while wandering around Canada so they ate a lot and were thankful. (I could be very wrong so please don’t quote me).

We do have our own traditions though and one is that during supper someone always asks those at the table to say what they are thankful for. Unfortunately, this is usually after stuffing myself into oblivion and even though I have lots to say  it never quite makes it out. I give the usual response of family or friends and if its been an especially good year maybe a new job or a something like that. It would seem too long winded and take too much work to say what’s really rattling around in my head.

But I really do want to share what I’m thankful for and since I’m lacking in a spectacular Thanksgiving recipe this seems like the perfect chance.

What I am so very grateful for is the second chances and sometimes third or fourth ones that the people around me freely give.

I’ll give my most recent example. This last week I was sick, Not bed ridden, the plague has arisen sick, but definitely sniffly and miserable. It seemed to linger on and on and with two small children I just couldn’t get the sleep I needed to kick it. Finally my body gave up and I took a day off just to catch up. I slept most of the day and still passed out at 9. I woke up in the morning feeling kinda icky but more alert than I have in a week.

With this alertness came a kind of saddening reality. That whole past week I had been absolutely short tempered with my lovely son. He has entered the “why” phase of childhood and my cold addled self just couldn’t answer his increasingly frustrating whys, (no I’m not going to pretend they’re not exhausting). So instead I was a little yelly and a little impatient and really the poor kid got the short end of the stick.

So today after picking him up from daycare and on the drive home I apologized. I explained that mommy realized she’d been angry this week and that I was terribly sorry for not listening better and for being upset a lot. He dropped his little head and agreed that I had been cranky and that he was sad about it. My heart broke and I thanked him for being so wonderful and told him that mommy would try to remember not to  be a jerk.

And that was it, we moved on and he was back to his exuberant little self, full of  new and wondering “whys”, except this time I harnessed all my energy and answered every last one, even if it was with “hmmmm, maybe dadddy knows”.

So that’s what I’m truly thankful for, the opportunities to fix mistakes, apologize and carry on. The space to be human and hope that even when I hurt those around me I can repair the damage done. Knowing that I can never take advantage of these chances because then maybe then they wouldn’t be given so freely.

Because the gods know I’m far from perfect and this will not be my last apology but most likely one of many that I will have to make.

So if you happen to be at the table with me when I say “I’m thankful for friends and family”, then see me shove more pie in my mouth, know that there is a lot more behind those words and that I am grateful for the chances you all give me throughout the year.

Happy Thanksgiving all and may your long weekend be filled with pie and love! 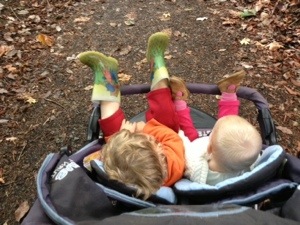 4 thoughts on “I Just Wanted to Say Thanks”